1
Türkiye quake: Locals help aid efforts while their families under rubble
2
After massive protests against pension reforms in France, what lies ahead?
3
Miraculous escape for Norwegian footballer who survives Türkiye quakes
4
Serbia could become 'pariah' over Kosovo, president warns
5
Council of Europe urges Italy to scrap its anti-migrant decree

Italy has declared a state of emergency in five northern regions on Monday, as research shows two other European countries, Portugal and Spain, are the driest they have been in a thousand years.

Italy has declared a state of emergency in five northern regions affected by the worst drought in 70 years.

Since the beginning of the year, northern Italy has seen half as much rain as it did on average in previous years.

The largest Italian agricultural producers association, Coldiretti, has warned that drought has so far caused nearly 3 billion euros ($3.10 billion) worth of losses in the agriculture sector. Wheat production suffered a 30 percent yield loss, while corn and fodder production saw a 45 percent reduction, according to the association.

More than a hundred municipalities across the region have declared water rationing.

The Po, Italy’s longest river, flows eastward for more than 650 kilometres from the Alps to the Adriatic Sea. High temperatures and a lack of snow in the mountains have compounded the problem. Farmers in Po Valley have been reporting that salty seawater is seeping into the river and destroying crops.

The emergency declaration comes a day after a glacier in the Italian Alps collapsed, killing at least seven people. Thirteen others remain missing.

Italy, alongside Norway, registered record temperatures in June, reaching over 40 degree Celsius across much of the country at the end of June. Slovenia and Croatia also hit new national records, which experts said were due to hot desert air travelling from Algeria to the Arctic.

The Iberian peninsula has also been suffering its driest climate for at least 1,200 years, according to research published this week.

The study, published in the journal Nature Geoscience, shows that Portugal and Spain have been facing record temperatures and droughts in recent years due to an atmospheric high-pressure system, the Azores High, whose extent affects precipitation in north-western Europe.

The researchers’ analysis of weather data going back to 1850 has shown that extremely large Azores Highs have been increasing in frequency since 1980. The change, the scientists say, is driven by climate change.

This May, Spain recorded the hottest temperatures on record. According to environmentalists, the Tagus River - the longest in the region - is at risk of drying up completely. 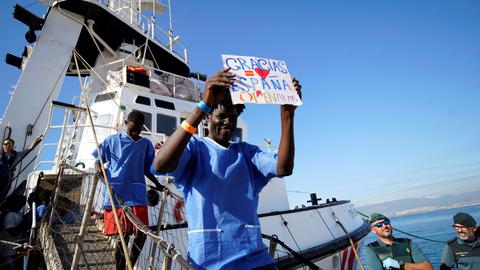 1
Türkiye quake: Locals help aid efforts while their families under rubble
2
After massive protests against pension reforms in France, what lies ahead?
3
Miraculous escape for Norwegian footballer who survives Türkiye quakes
4
Serbia could become 'pariah' over Kosovo, president warns
5
Council of Europe urges Italy to scrap its anti-migrant decree