As many as 75 fighters and six civilians have been killed in the fighting between two rebel groups that erupted on Tuesday and continues to expand to more towns and villages, according to the Syrian Observatory for Human Rights.

The fighting between the two rebel groups is ongoing and more fighters are joining in, the war monitor said.

The clashes erupted on Tuesday between members of Hayat Tahrir al Sham (HTS) – a group with historical links to Al Qaeda – and the Nur Al Din Al Zinki group, which is one of the largest groups in the Free Syrian Army (FSA) operating in northern Syria.

Activists said that some other FSA groups have also joined the fight against the HTS.

There are conflicting reports as to what triggered the fighting. HTS on Monday accused the FSA of killing five of its fighters. Critics of the group say it's part of a HTS campaign to eliminate moderate opposition from the area. 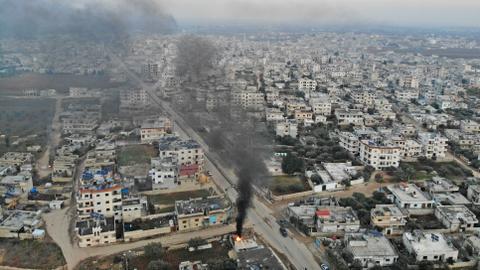