Rockets hit Iraqi base hosting US contractors after clashes with Daesh

At least four rockets struck an Iraqi airbase, the Iraqi military says in a statement, while other officials say one person was wounded at the base where an American defence company services combat aircraft.

Several rockets have hit the Iraqi military air base of Balad north of Baghdad, injuring one Iraqi contractor, according to Iraqi security officials.

No group immediately claimed the attack on Saturday.

It was the second salvo of rockets to hit a base hosting US forces or contractors in less than a week.

The officials spoke on condition of anonymity because they are not authorised to speak to the media.

The attack came hours after Iraqi security forces raided a Daesh hideout in the plains of Tarmiyah, with clashes leaving five militants and two pro-government fighters dead, according to the Iraqi military.

F-16s at the Balad airbase were backing the ongoing Tarmiyah operation against Daesh sleeper cells at the time of the rocket attack, two security sources told AFP.

Balad is around 60 kilometres (40 miles) north of Tarmiyah.

A local army source told AFP that Katyusha-style rockets were fired at Balad.

One of the rockets hit a part of the base hosting employees of Sallyport, the US contractor charged with maintaining the F-16 aircraft purchased from the US in recent years, the security sources said.

"An Iraqi contractor sustained moderate injuries," one of the sources said.

Another rocket hit a runway, without disrupting the take-off and landing of aircraft, while a third hit nearby woodlands, the source said.

Iraqi army units at Balad responded to the rockets by firing artillery at a position 12 kilometres east of the airbase where they believed the attack originated, the source added.

It is rare for Iraqi security forces to respond so quickly to such an incident.

US and Iraqi officials have blamed the attacks on armed factions with close ties to Iran — not Daesh.

Iraqi authorities have struggled to hold the perpetrators of rocket attacks to account, as some of the groups accused are integrated into the state security forces and wield significant influence.

The rocket attacks continued even as the US-led coalition drew down its forces and consolidated bases.

Balad, one of the bases from which the coalition withdrew, once held a small US Air Force contingent but now hosts Iraqi armed forces and the Sallyport contractors.

Its Erbil base was targeted on Monday night in a volley of rockets that killed one foreign contractor and wounded several others, as well as a US soldier.

Saturday's violence comes nearly one month to the day after twin suicide bombers killed more than 30 people in the packed Tayaran Square, the bloodiest such attack in Baghdad in three years.

Security sources said the two militants had infiltrated the city from the north.

READ MORE: UN warns that Daesh could be exploiting the pandemic

A few days later, nearly a dozen fighters from Iraq's Hashed al Shaabi, a powerful network of state-sponsored groups, were killed in an Daesh ambush — also north of the capital.

Since then, security forces have ramped up their efforts to hunt Daesh sleeper cells there, with Prime Minister Mustafa al Kadhemi announcing the killing of Abu Yasser al Issawi, identified as the top Daesh figure in Iraq, on January 28.

In early February, security forces killed another Daesh leader who they believed helped transport the twin bombers into Baghdad.

US forces in Iraq

Armed groups that some Iraqi officials say are backed by Iran have claimed similar incidents in the past, including an attack last week on the Erbil International Airport compound.

Iran-aligned paramilitary groups demand that all foreign troops, including US forces who number around 2,500 in Iraq, leave the country, calling their presence an occupation.

A US-led coalition whose mission is to fight Daesh militants is still stationed in Iraq, as well as a NATO-led mission that trains Iraqi security forces.

The US-led coalition has roughly halved its forces over the last year, leaving around 3,500 troops.

They are now based in Baghdad near the US embassy, as well as Ain al Assad in the country's west and Erbil. 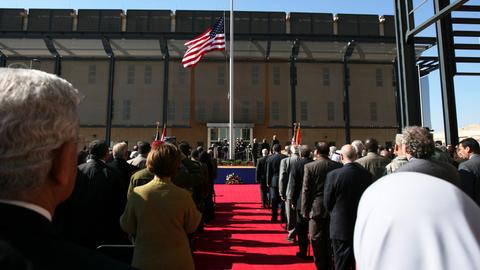