You and what Army? The rise of Sudan’s paramilitaries

Despite its role in ousting military dictator Omar Bashir, the army is now beholden to the whims of unstable militias it once relied on to keep the Darfur region in check.

The instability that plagued Sudan and led to the downfall of the longtime military dictator Omar Bashir has been a particularly bitter affair for the army.

While it was the military who eventually threw out Bashir, power in the capital has been increasingly devolved to an assembly of riotous militiamen, decked out in uniform, who have taken upon themselves the label and reputation of the army.

These so-called ‘Rapid Support Forces’, a notorious militia coalition whose leader Hamaidti Dagolo has emerged as a strongman in the transitional military regime, illustrate the extent to which Sudan’s army has been upstaged by independent militias who rule under its banner.

Its vulnerability cannot be lost upon the army, whose commander Kamal Mahi led the deposition of Bashir and whose former inspector Abdel-Fattah Burhan is the figurehead in the transitional government.

On one hand the 30-year repression, adventurism, and mismanagement on Bashir’s record made the military upon whom he rested unpopular.

On the other hand, the survival of military power has been increasingly taken out of its control and put in the care of an autonomous faction with a long record of violence, brutality, and – perhaps most unnervingly – insubordination.

There is irony, too, in the fact that Dagolo’s militiamen have rampaged through opposition processions chanting the slogan of the army, for they have themselves often crossed swords with the army chain of command. But in having allied so long with Dagolo, the officers only have themselves to blame.

The Janjaweed from Darfur to Khartoum

Dagolo’s militia is not a new factor in Sudan’s politics. It originated among the so-called Janjaweed, the ethnic militias employed in the peripheral Darfur region by the government to outsource its uncertain control there. A mixture of poor governance and Darfur’s connection with the long war in neighbouring Chad led to ethnic polarisation in which Khartoum, notwithstanding an official Islamic rhetoric that shunned ethnic division, sided squarely with pastoralist Arab-descended clans.

The earliest Janjaweed militias founded there, dating back to the late 1980s when the Chad war was in full swing, included the Rizaiqat militia founded by Dagolo’s uncle Juma, which engaged in repeated depredation against its Fur and Zaghawa neighbours with tacit governmental tolerance. This provoked an insurgency that soon received support from Chad’s Zaghawa-dominated regime, the opposition communists of northern Sudan, and the Western-backed rebels in southern Sudan.

The North Darfur governor, Ibrahim Sulaiman – himself a former army head – attempted to arrest leaders on both sides, but was overruled by Bashir’s lieutenants in Khartoum who preferred to back one side, the Janjaweed, to the hilt.

Sulaiman – summarily sacked before the Janjaweed militias were unleashed to support army operations in 2003 – later stated: “When the problems with the rebels started...we in the government had a number of options…We chose the very worst one.”[i]

By the latter 2000s, Dagolo had emerged as the most powerful Janjaweed commander, one who regularly flouted the military forces to whom he was theoretically allied. In 2006, he independently cut a deal with certain rebel factions; in 2007-08, wearying of military attempts to rein him in, he mutinied and turned rebel until his terms were met by Khartoum, which anxiously complied.

Dagolo reportedly charmed Bashir, but his connections went further; by the mid-2010s, he had contracted his militias, formally dignified with paramilitary status by a weakened Khartoum, to serve alongside Gulf forces in Yemen. His steep rise to power in a Sudan whose fate remains of key interest to Riyadh and Abu Dhabi is therefore no coincidence.

If Dagolo’s case is startling, it is by no means unique. The Darfur war saw Khartoum, in a “reconciliation” widely encouraged by the international community, outsource its work to a variety of largely unsavoury groups. These included not only the Janjaweed but some rebels-turned-vassals: Minni Minnawi, a brutal Zaghawa adventurer, was heavily backed by the United States, and in 2006 he was given an official role as Bashir’s deputy after a treaty mediated by Nigeria. This he celebrated by ordering hits on neighbouring communities in Darfur.

As pressure on Sudan mounted, a series of unreliable rebel commanders across Sudan were bought off and given major government positions in the late 2000s, including Abul-Qasim Imam in the west, Moussa Mohamed in the east, and Malik Agar in the south; some subsequently returned to revolt.

Nor are the Janjaweed the first paramilitary forces upon whom Sudan has relied. In the 1980s, Bashir’s predecessor Sadiq Mahdi – now ironically an opposition leader – used ‘murahileen’ militias in the southern war; in the 1990s, Bashir used ‘mujahidin’ militias. Where the Janjaweed differ is the extent to which they have overtaken their theoretical superiors in the army. The terror in Darfur has come home to roost in the capital.

The phenomenon of paramilitaries turning the table on militaries is not new. Several states plagued by instability or insurgency used paramilitary forces to help the government, only for the paramilitaries to emerge unexpectedly powerful competitors. In the 1980s Afghanistan’s communist dictator Muhammad Najibullah outsourced counterinsurgency to a series of brutal paramilitary commanders such as Abdul-Rashid Dostum. They eventually fell out with him and helped throw him out in 1992, remaining kingmakers in Afghanistan either side of the short-lived Taliban period.

After the Iranian revolution overthrew Tehran’s monarchy, a disgruntled army that had largely benefited from the ancient regime had little choice but to rely on revolutionary Pasdaran forces in the war against Kurdish separatists and Iraq; by the time this war was finished, the Pasdaran had emerged as Iran’s most powerful armed actors, upstaging the earlier army entirely. Iraq’s own counterinsurgency since the 2003 invasion has relied increasingly on independent militias – commanded by former guerrillas such as Hadi Amiri, Jamal Ibrahimi, and Bayan Jaber, who have enormous influence in the Baghdad government.

On occasion, armies have bitten back and nipped their partners in the bud. In 1963 Iraq’s military dictator Abdul-Salam Arif, having allied with Baathists to seize power, suddenly turned on and purged them. In the 1970s Pakistan’s army, having allied with Zulfikar Bhutto in order to fight separatists in Bangladesh and Balochistan, suddenly turned on and ousted Bhutto and his party militia. Newly independent Algeria (1960s) and Bangladesh (1970s) saw similar preemptive strikes by the regular army against their erstwhile allies.

While such results are not always desirable, a Khartoum junta minus the Janjaweed would probably serve Sudan well: unlike the rapacious militia, military Sudanese regimes have historically been more open to compromise with opposition than most of their neighbours. The alternative would be to let Dagolo hold not only the army, but potentially the Sudanese state itself, hostage to his fickle mercy. 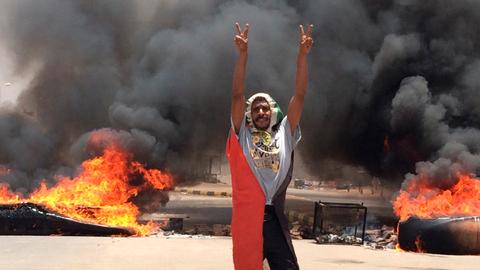 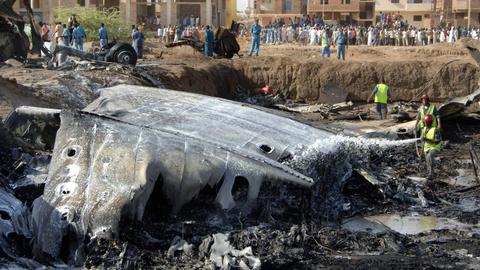 At least seven die in Sudan after helicopter crash