A Turkish feminist tackles the creepy ‘pick-up artists' of YouTube

1
Japanese monk releases beatboxing musical outreach amid Covid-19 lockdown
2
A cartoon school in Kas is Turkey’s first, and more is yet to come
3
The 48th Istanbul Music Festival's coming to a screen near you in September
4
Reporter sues Golden Globes organisation over member rules
5
Famed V&A Museum reopens with strict Covid-19 measures

Zeyno Pekunlu's "How to properly touch a girl so you don't creep her out," explores the misogyny behind Youtube pick-up artist culture.

The voice on the screen is coming from a man standing outside and holding a camera. He tilts his head towards the viewer and in a conspiratorial tone says, "Let's talk about women."

This is how Zeyno Pekunlu's "How to properly touch a girl without creeping her out," begins, before launching into a 20-minute long instruction manual on how men should bait women. The men in these videos are self-proclaimed pick-up artists — men who teach other men tricks on how to woo a woman under a misogyny-laden theme.

Pekunlu's satirical video, "How to properly touch a girl without creeping her out," brings together an absurdist compilation of clips from Youtube videos. The original videos answer questions like "What do women want," and "How to get a woman." Most of the men in these videos hail from Western countries, and claim that they have years of success trying out their seduction tactics.

Pekunlu is a Turkish-born artist who lends her voice to the feminist community through her work. Her images, moving or still, not only centre around the women's equality moment, but around the way information is communicated and understood. This is shown diligently in one of her more well-known works "Everything I know," a project that involved her charting everything that she learnt over a period of four months.

A good deal of the work that she does takes place in her home, a breezy, brightly lit apartment in the thick of Istanbul. She is tall and thin, her demeanour is composed and quiet but there is an air of authority in the way she sits, smoking a cigarette as she talks.

The artist began exploring melding social commentary and art when she was young. Her appetite for social change was fuelled by a furious debate and conversation with like-minded individuals that started when she was in high school. Everything that followed in university and afterwards, when she became an artist, was spent honing that passion.

It is hardly surprising that Pekunlu got involved in art and social commentary. She grew up in a family of free-thinking academics who encouraged her to challenge the status quo and view the world through equality and justice-tinted glasses.

"I come from a political family and from a high school with liberal students," she says as she sits in her study brimming with Turkish books on civil movements.

The family and society that Pekunlu grew up in is one where national and international events fostered social consciousness and sparked sensitivity.

"It shows the fragile aspect of masculinity, the lack of confidence or being afraid of women," and goes on to note that the pick-up videos objectify women, and that there is no equal footing between the way men and women are seen.

"These videos are the crystallised version of how people look at women," she says matter-of-factly.

Pekunlu, who received part of her university education in Barcelona, acknowledges the way that women are perceived in these videos are just the tip of the iceberg.

The staunch feminist, however chooses to focus her commentary on what is at home, in Turkey.

"The most important (issues) are rape issues, sexual assault which are discussed widely (in Turkey).We need more women working outside their houses and earning more money," she says, tapping off the ash at the end of her cigarette.

With issues such as domestic violence so prevalent and lack of equal financial control still common in many households, she says that "It is hard not to be a feminist in Turkey."

The feminist refrain finds its way into other projects that she has worked on. Take the short film "Pretty Furious Women" for example. The 3-minute short film condemns domestic violence. It exudes a cheesy B-Grade movie vibe, while telling the story of a foreign woman - Pekunlu plays the lead character herself - travelling to Jakarta to train in an Indonesian form of martial arts called Silat Beksi to defend herself against her abuser.

Silat Beksi is a part of Indonesia's cultural heritage, which Pekunlu says is adopted by teenage girls as a self-defence tool.

From all of this, the display of misogynistic messages, the documenting of knowledge, practicing the art of using one's fists to defend oneself, what does Pekunlu want? "I just want to live a better life."

Does she mean a better life for herself? "I want justice and equality for everyone, for the oppressed." The bar is set high, it involves change and may not even be something that is achieved in our lifetime. But it is a standard that aims to shift the tone towards a more empowering one when the words "Let's talk about women" are spoken.

Pekunlu's "How to properly touch a girl so you don't creep her out" will be on display at Ankara's Salt Ulus modern art museum until the 7th of January. 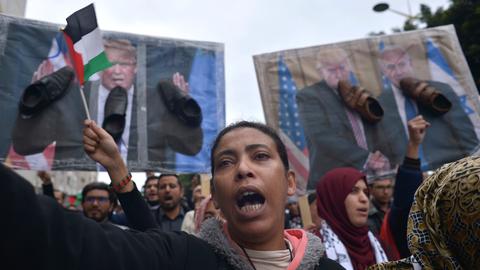 Global protests over US decision on Jerusalem

1
Japanese monk releases beatboxing musical outreach amid Covid-19 lockdown
2
A cartoon school in Kas is Turkey’s first, and more is yet to come
3
The 48th Istanbul Music Festival's coming to a screen near you in September
4
Reporter sues Golden Globes organisation over member rules
5
Famed V&A Museum reopens with strict Covid-19 measures