Kyrgyzstan on Saturday announced that its death toll had risen from 31 to 33 in recent border clashes with Tajikistan over water resources.

The presidents of Kyrgyzstan and Tajikistan spoke by telephone hoping to maintain a fragile ceasefire after the worst border clashes between the ex-Soviet countries left at least 33 dead.

The talks on Saturday came after Kyrgyzstan accused Tajikistan of violating the truce, but the press services of Kyrgyzstan's leader Sadyr Japarov and Tajikistan's Emomali Rakhmon said they discussed fulfilling the agreement reached Thursday, when the fighting erupted.

Clashes between communities over land and water along the long-contested border are regular occurrences, with border guards often getting involved, however this week's violence was by far the most serious during the Central Asian pair's 30 years of independence.

Kyrgyzstan on Saturday announced two days of mourning and said that its death toll had risen from 31 to 33, with over a hundred other Kyrgyz injured and at least 30 properties destroyed in its southwestern Batken region.

Despite the ceasefire, Kyrgyzstan's national security committee said that Tajikistan's military had "opened fire on dwellings" in Batken's Leilik district on Saturday.

The security committee in a separate statement said that Tajikistan was breaking the ceasefire by bringing its forces closer to the border and periodically firing at cars travelling along a road running through the disputed territory.

Tajikistan's military also blocked off one strategic section of road, the security committee said, cutting off a Kyrgyz region to the rest of the country.

An AFP correspondent in Batken was unable to reach the conflict area because Kyrgyz men holding stones were turning back cars on a road lined by Kyrgyz soldiers between the village of Min-Bulak and the town of Isfana.

Kyrgyz authorities said on Friday evening that fighting had finally stopped, after a ceasefire agreement that was reached on Thursday evening failed to end intermittent shooting during the day.

Tajikistan, a closed authoritarian state, has not officially acknowledged any deaths or damage from the conflict and has not confirmed that fighting has resumed.

Despite signs of tensions flaring at the border on Saturday, high-level contacts between the countries are being maintained.

Japarov and Rakhmon were speaking on Saturday for a second time in two days, with the pair also agreeing to meet face-to-face in the near future.

They also agreed that Kyrgyz and Tajik delegations would meet in the Batken region on Saturday to discuss issues at the border including delimitation.

Kyrgyzstan's government said on Saturday that this meeting was underway.

In the Kyrgyz capital Bishkek, several hundred rallied outside government offices and demanded the government hand them weapons to fight at the border.

A statement released by the national security council via Japarov's office said the demonstrators' demands were impossible to fulfil "because they are fraught with consequences".

Border disagreements between the three countries that share the fertile Fergana Valley — Kyrgyzstan, Tajikistan and Uzbekistan — stem from demarcations made during the Soviet era.

Neighbouring Uzbekistan and Russia, which maintains bases in both countries, have offered to mediate the latest conflict. 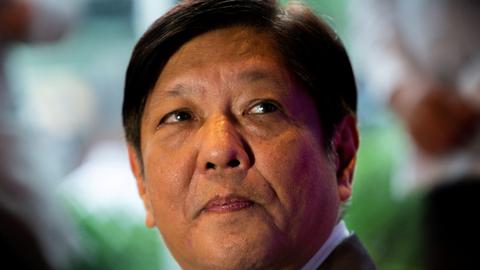