How long will world continue to ignore Assad war crimes?

Thousands of civilians have been massacred by the regime’s soldiers in the past 11 years as global powers continue to turn a blind eye.

The voice at the other end of the phone call sounded nervous. Almost on the verge of panic. He rarely takes phone calls from unknown numbers these days. But he has to be careful. His life depends on it.

He does not want to be identified beyond a single letter M.

It has been like this ever since he escaped death by a whisker on a balmy summer evening—June 28, 2012—when soldiers loyal to Syrian regime leader Bashar al Assad carried out one of the most horrific mass murders of civilians in Eastern Ghouta.

M says he was the sole survivor of what is now known to locals as the Al Tuema Massacre. At least 100 people were killed that evening.

M was just 10 years old then. “There were corpses everywhere. My relatives, neighbours, brothers…all were killed,” M tells TRT World, recalling in chilling details the chain of events on that fateful evening.

The horrors of Al Tuema remained mostly untold till now but slowly evidence of the Assad regime’s war crimes have started to emerge from the bombed neighbourhoods of Syria where the civil war has left an estimated 500,000 people dead and displaced millions over the past decade.

Last month, The Guardian published a chilling report—backed by video evidence—of the cold-blooded murder of at least 41 civilians in a Damascus suburb on April 16, 2013.

The Tadamon Massacre, as it has been referred to, however, is just one among countless war crimes committed by the military of Assad’s regime, which is backed by Russia.

M speaks haltingly, as he recalls the day that would change his life forever.

It was June 28 and M was awakened early by the sounds of heavy artillery and tanks rolling into the locality. Eastern Ghouta was then a territory under the control of rebels fighting Assad’s regime. Only a few days ago, Assad had amassed troops to take back control of the area. By late afternoon, armed soldiers had started a house-to-house search, looking for “terrorists,” the term used by the regime for rebels.

“Due to the constant bombardment, we decided to go down to the ground floor. We didn't know what was going on outside. We could hear the voices of women and children screaming. But the gunfire drowned these voices,” M recalls.

About half-an-hour later, a group of soldiers broke open the door and entered the house. “They took us all to a separate room and began interrogation. My uncles and brothers… women and children, all were there,” he says.

Then began the questions. Blunt and short—“Are you terrorist?” “Do you assist armed groups?” The questions went unanswered. This seemed to have infuriated the intruders.

“The officer grabbed me by the collar and dragged me out of the room. He told the soldiers to beat me till I tell them where our money and jewellery were,” M. says, recalling that after the soldiers had looted everything, the officer told everyone above the age of 13 to follow him.

M’s uncle whispered that they were all going to be killed. “I told myself, it was impossible. We had done nothing.” M was about to see the most ugly and vicious face of war.

Fifteen people, including M, were bundled into a small space in the house.

“Then came another officer, who was younger. He said, ‘If I get no answer to the question I ask you, you will die’. Even before we could comprehend the threat, the first question came to us.”

“Where are your weapons?” M recalls the officer asking.“My younger uncle said, ‘We don't have weapons, we are civilians’.”

“The officer just pointed his Kalashnikov at my uncle and shot him in the chest. My uncle, who fell in front of us, died right there. We were horrified by what we saw. We all started crying together.”

Not even the hardiest Syrian, living and surviving through a seemingly never-ending war, could have been prepared for what followed next.

“When the same question was asked again, no one answered. Then the soldiers started firing randomly. The crying stopped. The whimpers faded away,” M says, his voice now almost a whisper.

“Surprisingly no bullet hit me. Everyone around me was either dead or injured. The soldiers were killing the wounded. I stood there motionless for hours. After the voices faded, and I was sure the soldiers had left, I got up…”

Over the past 11 years, the Syrian Ba’ath Party, led by an increasingly emboldened regime leader Assad, has targeted civilians in an attempt to crush all support for the rebels.

One of the most painful massacres took place on August 20, 2012 in Darayya, a suburb of Damascus. The city’s entrances and exits were closed by regime soldiers, and a week-long bombardment was carried out on civilians celebrating Eid al Fitr.

An estimated 700 people lost their lives in the air raids. The identities of only 522 of the dead could be confirmed. At least 1,500 civilians were injured, many of them maimed for life.  Once the air raids stopped, regime soldiers went from house to house, killing anyone in sight. Men were rounded up and executed. When they ran out of bullets, the soldiers used knives to slash the throats of women and children, survivors recall.

In August of the same year, a chemical attack on Eastern Ghouta caused at least 1500 deaths.

According to Mohammad Awwama, who witnessed the chemical attack, “The Assad regime wanted to send a message of fear by killing as many people as possible in its war, with the support of Russia and Iran. So the regime had authorised its soldiers for execution. This has resulted in many brutal massacres. Most of those killed were civilians.”

Referring to the video of the Tadamon Massacre, he adds: “Those who carried out this execution seem to have done it hundreds of times. This shows that they often commit such massacres.”

If any proof was needed of Assad’s crimes, all lies in one video clip shot by a young soldier who could not live with the burden of his conscience. 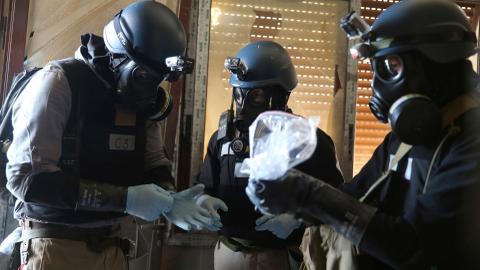 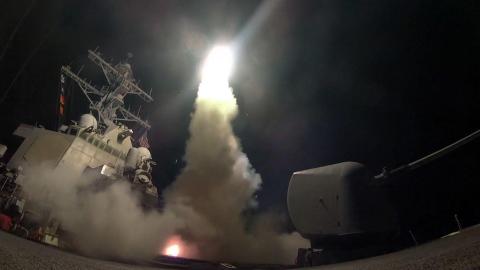 US strikes in Syria evoke mixed responses from Syrians in Turkey