New questions have emerged about the location of Saudi critic Jamal Khashoggi’s body with the recent revelation that the Saudis hesitated to give Turkey permission to search a water well inside the residence of the Saudi consul general in Istanbul.

Riyadh previously promised to collaborate with Ankara on the murder of Khashoggi, allowing Turkey to search its consulate premises.

Saudi leadership recently conceded that its officials were involved in the killing of Khashoggi in its Istanbul consulate, dismissing five of its top officials which included the country’s second highest intelligence official. The Saudi government also arrested 18 other officials in connection with the killing.

On October 15, the Saudis allowed Turkish law enforcement officials to search the premises of the Saudi consulate in Istanbul. The Turkish search continued for over nine hours, extending into the next day when Turkish police also searched the residence of the consul general.

But after two hours of searching the consul general’s house and garden, the Saudis abruptly interrupted the ongoing search, forcing Turkish officials to leave the residence.

Because diplomatic missions including consulates have diplomatic immunity according to the Vienna Convention of 1963, which Ankara is a signatory to, Turkey can not raid or search the consulate territory without permission from Saudi consulate officials or from the country’s foreign ministry.

Meanwhile, there was an exchange between Turkish and Saudi authorities concerning the interrupted search according to TRT World sources.

After the exchange, Saudi consulate officials decided to allow Turkish authorities to search the premises of the consul general's residence again.

As many media outlets reported, Turkish officials again searched the residence of the consul general on October 17.

But apparently, a water well inside the residence had not been searched, either for safety reasons or due to Saudi resistance, according to conflicting reports.

Until Wednesday evening, it was not clear whether the search of the well had been conducted or not.

There have been unconfirmed claims that the corpse of Khashoggi could be in the well. Until now, the Saudis have refused any knowledge of where the body is located - despite confessing to the killing.

Despite the Vienna Convention of 1963, which regulates diplomatic immunity, the convention still allows states to capture, detain and arrest alleged perpetrators if they commit a felony against an individual or individuals in its territory according to Ersan Sen, a prominent Turkish law professor, who specialises in criminal law.

In the Khashoggi case, a felony has definitely been committed by officials of the Saudi state which also admitted its involvement of the felony inside its Istanbul consulate.

Turkish President Recep Tayyip Erdogan's promised in his speech that Ankara will reveal the “naked truth” about the killing which he termed “a savage murder.” 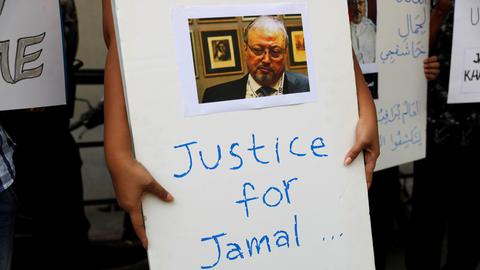 How Turkey can move forward with prosecuting Khashoggi’s killers