The dark ideology behind the PKK and YPG

While some global powers portray the PKK and its affiliates in positive light, the organisation - designated a terror group by both the US and Turkey - has inflicted violence on Turkey and played a divisive role in northern Syria.

The YPG serves as the armed wing of the PYD, initially based in the Kurdish-majority regions of northern Syria, before they expanded southwards towards non-Kurdish regions.

The Rojava administration in northern Syria, which was founded by the PYD in 2013, has often been presented as a success story of the "struggle against borders and for autonomy".

They earned  international praise in their fight to liberate Kobani from Daesh. During the Syrian civil war, the PYD has established three enclaves, or ’cantons’, of Kurdish-majority areas. In November 2013, the group declared these cantons to be the transitional administration for ‘Rojava’ (Western Kurdistan), a first step towards realising their vision for the region.

But their new-found fame in the fight against Daesh was short-lived. Almost overnight, the PYD became pariahs for attacks on rebel groups in Aleppo made in a bid to carve out as much territory as possible for the envisioned ‘Rojava’, before the Assad regime arrived.

On closer inspection, Rojava is less glamorous than it seems, with altogether more sinister political objectives.

On July 30 2017, an obscure anarchist thinker by the name of Murray Bookchin passed away. Shortly after, the PKK assembly released a two-page statement acknowledging him as “one of the greatest social scientists of the twentieth century”.

The statement reads: “One of Bookchin's most important findings is that …freedom and socialism can only be realised in a system outside of the state machine…We undertake to make Bookchin live in our struggle.”

The PKK’s leader, Abdullah Ocalan, was a deep admirer of the thinker, channelling his ideas during the 1990s to rebrand the militant Marxist-Leninist PKK as an organisation that emphasised feminist values, ecological socialism and communalism.

Having built a personality cult around himself, Ocalan re-orientated the PKK into a Marxist ideology blending anarchism, environmentalism, and feminism to fight a patriarchy that would lead to the downfall of the nation state.

Recent reports by Anadolu Agency described first-hand accounts by former PKK fighters of an organisation rife with rampant sexual abuse, harassment, not to mention the sexual abuse of minors, with little to no accountability.

One escaped victim, speaking to Anadolu Agency, stated: “The PKK is not only a social structure, but a corrupt and degenerating structure that reduces and undermines the identity of women… it tries to build its own moral order on the basis of a perverted mentality.”

The YPG and PKK are careful not to reveal their anarchist ideology. Their espoused manifestos emphasise ethnic, sexual and religious pluralism. The organisation’s supporters and members however, openly speak of Rojava as an alternative to the nation-state, and the region; effectively creating a borderless, stateless world.

In a recently released video acquired by TRT World, this schism between the official party line and de-facto ideology was highlighted.

While the website has since been taken down, the video was traced to the Internationalist Commune of Rojava, a staging ground for re-education and preparation of new members of the PYD; before they decide whether to become fighters for the YPG, or contribute in another way to the cause.

To achieve its secessionist goals, the group relies on fundraising. On its official website, it asks for donations, with the money sent to a bank account in Germany.

One of its members recently recorded a video in which she addressed the French Yellow Vest protestors, encouraging them to rise up against the state, while clarifying the anarchist roots of the Rojava ideology.

“To achieve a communal life," says the masked member while speaking into the camera. "It is necessary more than ever to forget the myth of the nation state, which represents a false republican unity. We have to take down the borders that separate us.”

Not to be outdone, she adds, “Winning this movement is not about building on the existing alternative structures to build another stage of self-governance. To win means facing contradictions… to emancipate from the state and existing oppressing structures, that we can live free.”

The views presented are highly similar to those presented by extremist anarchists who seek the end of all states, believing in self-governing anarchy, without law and order.

But it would seem that in spite of these entrenched views, the PYD was not above presenting themselves as mainstream liberals for political convenience.

Turkish President Recep Tayyip Erdogan recently warned of the security threat such anti-state groups pose, pointing to the PKK’s presence amidst France’s Yellow Vest movement, and their possible role in spreading the protests to other countries.

The history of the group shows a long road of discarded alliances, ideological inconsistency and controversial deals.

In March 2011, after initially supporting the anti-Assad revolution, the PYD and PKK were under heavy artillery fire by Iran in the Qandil mountains, which serve as headquarters for the group and its many affiliates.

Their leader, Abdullah Ocalan quickly took necessary action. The PKK propaganda outlets went from supporting the revolution, to undermining it. They attacked the budding resistance for being ‘controlled’ by the Muslim Brotherhood.

But this was only the beginning. On April 6 2011, Ocalan cut a deal with the Syrian regime. In a letter given to his lawyer, he offered the Syrian regime support in exchange for partial autonomy.

“Cultural and self-administration rights could be recognised as part of these reforms; for example, municipalities could be run [independently]. Kurds could be given the chance to administer their affairs for themselves and have their identity recognised. If they [the Syrian regime] do that, we will support them […],” he wrote.

The letter ends with a casual remark: “The Assad family knows my approach to the cause.”

However, there was nothing casual about the remark.

Deep ties to the Assad regime

From 1979 to 1998, Syria’s former ruler Hafez al Assad, aided the PKK in establishing training camps, in exchange for the PKK’s use in proxy warfare against Turkey. The PKK also held at least two conferences in Syria, and received weapons and financing from the regime.

When the PKK declared war on Turkey in 1984, al Assad allowed the PKK to recruit Syrian Kurds for the conflict.

But this wouldn’t last forever. Turkey gave Syria an ultimatum in 1999. Give up Ocalan or face war. The PKK’s leader was arrested and deported to Turkey. Nearly a decade later, with the rise of the Syrian civil war, Ocalan saw his chance again.

In another statement in April 2011, Ocalan repeated his previous demands and instructed his fighters to side with whichever side would allow it to establish Rojava.

“If Syria accepts these demands, support will be given to Assad […] If the state moves in the opposite [direction], takes temporary steps and adopts a dilatory political approach, the Kurdish people, led by the PYD, will fight alongside the Arab opposition, following the principle of democratic self-administration,” he said.

Syria’s Bashar al Assad was open to this. In the same month, 100 PKK fighters made their way from the Qandil mountains to Syria, where they organised themselves into the YPG, left to their own devices by the Syrian regime. By the end of 2011, Assad allowed the PYD to open six Kurdish propaganda schools in areas under the Syrian regime. By March 2012, 2000 more PKK fighters would enter Syria.

In July 2012, the Assad regime withdrew from Kobani, Afrin and Amuda, abandoning most of northeast Syria, whether by design or to concentrate their troops elsewhere. The YPG took the towns with barely a shot fired, proudly declaring that they ‘liberated’ the territories from the Syrian regime.

In light of previous discussions between the YPG and the Syrian regime, the sudden anti-Assad stance was surprising. A review of repressed crackdowns on anti-Assad demonstrations, media outlets and the arbitrary arrest of activists afterwards suggests that the withdrawal was coordinated, perhaps along the lines of Ocalan’s offer to Assad.

Kurdish leaders Mashaal Tammo and Abdullah Bedro were organising an anti-Assad regime coalition before being assassinated. Although the PYD denied involvement, the body of a YPG fighter was discovered at the crime scene.

The stated goal of Rojava is to build a liberated, democratic society with equal rights for all, drawing on the ideology of PKK leader Abdullah Öcalan. While the PYD doesn’t publicse organisational links to the PKK, it was established by Syrian PKK members and adheres to the same ideology.

In 2013, YPG commander Salih Muslim, took to repeating the Assad party line, claiming that rebels were behind the chemical attacks in Ghouta. In essence, he claimed that rebels had gassed themselves and their families to trigger foreign intervention. But this was just the tip of the iceberg where Muslim was concerned.

In November 2011, he stated that the PKK’s summary execution of other Kurds seen as “traitors” was justifiable.

After all: “If the PKK punished people, it had its reasons,” he commented.

Expansion at any cost

Anything was, and it would seem is, justifiable to make Rojava a reality.

Multiple witnesses and human rights groups point to the YPG forcibly displacing thousands of Arabs and Turkmen from the region of Tel Abyad, including threats to burn down the houses of non-Kurds.

As the YPG advanced on Tel Abyad with heavy US air cover, nearly 16,000 civilians were forced to leave.

One refugee claimed the group told local Arabs their territory was within ‘Rojava’. Ibrahim al Khider, a powerful local tribesman, was told that he and his people should: “Go back to your desert.”

While the YPG presents itself as the champion of Syria’s minorities, the Assyrian Khabour Guards ended their alliance with the YPG. They claim the group turned on them, killing their commander and attempted to drive them out of their villages. One Amnesty International report claimed the Arab-populated village of Husseiniya saw more than 90 percent of its buildings destroyed by the YPG to ensure that residents couldn’t return.

Although the YPG strongly denies these claims, their conduct in Tal Abyad seems rooted in a long-standing YPG policy toward Arabs. In 2013, YPG leader Muslim said that Arabs in lands they deemed to be Kurdish “will have to be expelled” because “all the villages” there belong to the Kurds.

His reference appears to have been confirmed following the takeover of villages with few or no Kurdish inhabitants.

The YPG’s actions have elicited discontent even within its ranks. Some foreign fighters embedded within the YPG have shared their reservations.

One German volunteer described the YPG’s deployment of untrained minors into battle as though it were “a school trip with guns”. When asked about the forced displacement of villagers, he admitted, “they’ll trash the place” if it’s an Arab settlement.

With the recent US commitment to withdraw from Syria, the YPG’s most recent alliance of convenience is threatened, and with it their vision for an anarchist utopia. While a skilled public relations campaign from within often portrays their struggle as one for democratic liberalism and justice, their practice wins over their stated principles. 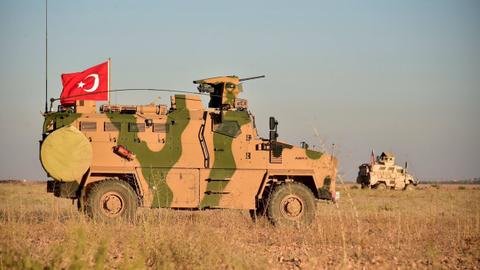 Explained: Why northern Syria’s political arena is so complicated