'In the end they want you to leave'

As Israel plans to deport African migrants to unknown countries, thousands of asylum-seekers, even those who have started families with Israeli partners, are staring at an uncertain future.

TEL AVIV — After Baso Balula fled Sudan in 2011, smuggling routes through the Sinai took him to Israel. The 34-year-old, lean and well-spoken man, Balula, had spent several years as a combatant, fighting against the Sudanese government in the Nuba Mountains, where he is from. He shunned violence in 2005 and briefly served at the UN in Darfur before seeking asylum in Tel Aviv, fearing persecution if he returned to his village.

Balula scraped together some work in the predominantly Jewish city, started working in a metalworks factory in Tel Aviv. He soon met an Israeli woman, and the couple had a girl, who's now three years old.

In early February, the Israeli government began issuing deportation notices to refugees. They were given two options: either to leave “voluntarily”and receive $3,500 and a plane ticket, or face imprisonment.

By April, the government plans to imprison all those who choose to stay back – a process that began this week when seven Eritrean refugees were imprisoned after refusing to leave, prompting protests outside the Holot migrant detention centre in the Negev desert

Children, women and families will not be subject to the procedure. But the calls for mass deportation have increased Balula’s sense of insecurity and left him looking for alternative options for his family outside of Israel.

“In the end they want you to leave. Doesn't matter if you have a child, if you have an Israeli partner," Balula told TRT World.

Balula said he had formally applied for asylum but the government hasn't responded to his plea as yet. The couple is unable to get married because Jewish people are not allowed to marry non-Jews in Israel. While marriages performed outside Israel are recognised, Balula's status as an asylum seeker does not allow him to travel abroad.

“Since we went to the ministry of interior to start the process with my partner, they cancelled my visa and said I am not allowed to get a visa anymore until I bring all the documents. So I ended up without a visa and every time they promise me the next appointment. It has been four years,” he recounted.

Soon after, the Israeli government announced asylum seekers – which politicians often refer to as “infiltrators” would soon have to choose between deportation to an unnamed African destination (known through press reports to be Rwanda) or indefinite imprisonment. There are roughly 38,000 asylum seekers living in Israel, about 90 percent of whom are from Eritrea and Sudan.

“Those who haven't applied and those whose asylum application is rejected are most at risk,” explained Dror Sadot, spokesperson for human rights group Hotline for Refugees and Migrants.

The idea of deportation has left 29-year-old Tomas Yohanes clueless about his future. Though he spent 12 months in a migrant detention centre in the Negev desert in southern Israel, Yohanes is not happy to leave.

“I don't know what will happen after I leave in [about] 10 days,” said Tomas as he sat at one of the plastic-clothed tables in a hole-in-the-wall Eritrean restaurant near the central bus station in south Tel Aviv – a neighbourhood the Eritrean and Sudanese communities have called home for the past decade.

Some have set up shops and restaurants like this one, its walls adorned with posters displaying scenes and passages from the Bible – many Eritreans are devout Christians. Others are seen sleeping rough in the nearby Levinsky Park.

The Israeli government has so far granted asylum to only 11 Eritrean and Sudanese refugees. Many wait for the outcome of their application for years. Europe accepts 90 percent of Eritreans' requests for asylum, while the acceptance rate for Sudanese is around 60 percent.

Tomas travelled to Tel Aviv from Holot with a special three-day permit from the immigration authorities to attend his first asylum interview since applying three years ago.

“All Eritreans are rejected,” Tomas said, an Eritrean TV show playing in the background. “If they don't give me an answer [on my asylum application] it's better, I have more time.”

According to activists, a few dozen people have received notices so far, but an estimated 15,000-20,000 are eligible under the announced procedures. The Population, Immigration and Border Authority also announced that asylum applications submitted after January 1, 2018 would not “delay the demand for an infiltrator to leave to a third country.”

Israeli Prime Minister Benjamin Netanyahu has dismissed criticism that the policy may be violating international law, saying the asylum seekers are irregular migrants looking for work.

“But international law also gives the right to a country to remove from its borders illegal migrants. We have no obligation to allow illegal labor migrants who are not refugees to remain here.”

For Teklit Michael, a 29-year-old community organiser from Eritrea who has lived in South Tel Aviv for 10 years, the Israeli government perceives non-Jewish refugees as a demographic threat.

The reason behind such hostility, Michael said, is precisely because Eritrean and Sudanese refugees are mostly Christian and black.

“What I understand from people, those who will be given the choice will prefer to stay in prison,” said Michael.

Like many others, Teklit is waiting for an answer on his asylum application and has to renew his visa every month – refugees' visas normally last up to two months, which coupled with the near-impossibility of getting an asylum request approved, leaves them in a state of extreme precariousness.

Eritrea, considered one of the world's most repressive dictatorships, has not held a national election since independence in 1993. All independent media were shut down in 2001, and arbitrary detentions are common. Freedom of movement is severely restricted outside and within the country.

For many Eritreans the option of returning home is out of the question. For instance, Tomas came to Israel with a simple motive to survive unharmed. Six years ago, he fled open-ended national service and political persecution in his home country.

He worked as a shop assistant in Ramle, a city in central Israel, but lost his job when a year ago he was summoned to spend a year in the desert facility, which is due to close in March.

“Life in Ramle was good, I was working,” he recalled. “Maybe I'm here today, tomorrow I don't know. From when I came to Israel up to now I don't have any plan. Because the government is changing the law every month, every year. Some days they are calling me infiltrator, some days they are saying you have come here to work.”

Amnesty International has described national service in Eritrea as forced labour. According to the human rights group, some Eritreans have been in open-ended conscription for as long as 20 years. But the Israeli government does not accept this as a valid reason to approve their asylum claim and considers them army deserters.

“In Eritrea it's not national service, it's national slavery,” said Tomas. “They are working for the ministries, only for government members. Building houses for the ministers, they are not paying anything. And they are always thinking you might be [plotting] to oppose the government.”

“I escaped from Eritrea to Ethiopia, from Ethiopia to Sudan. When I was in Sudan, the smugglers took me by force to Sinai,” he added, explaining that his family had to sell their home in order to use half of the money to pay the smugglers $5,000. “In Sinai [some people have to pay] about $30,000 to $40,000. Me, I had a chance. If you don't pay, they will kill you.”

Tens of thousands of Sudanese and Eritreans arrived through the Sinai route before Israel erected a security fence equipped with cameras and motion detectors, whose construction began in 2010.

According to UNHCR, from December 2013 until June 2017, about 4,000 Eritrean and Sudanese asylum seekers were relocated under Israel’s ‘voluntary departure programme’ to Rwanda and Uganda. The refugee agency said in a statement last November it was “concerned that these persons have not found adequate safety or a durable solution to their plight and that many have subsequently attempted dangerous onward movements within Africa or to Europe."

At a recent demonstration in Jerusalem, many protesters carried pictures of migrants who were deported from Israel and later died in an attempt to reach Europe.

Reports also emerged late in 2017 of migrants being auctioned in slave markets in Libya for as little as $400.

The UNHCR appears to be in talks with the Israeli government to resettle some asylum seekers from Israel to safe third countries in exchange for others being granted permanent status in Israel.

Meanwhile, lack of transparency surrounds agreements with Rwanda and Uganda to take in refugees, with both countries denying there is even an agreement. Nowhere to go, the refugees find the Israeli government's deportation plan and the offer of free plane tickets unreasonable. The stalemate is pushing them toward despair.

Balula, a Sudanese migrant who is living with an Israeli partner, has come to the point of exhaustion. It's been four years since he has been working without a visa and the government is adamant on pushing migrants like him out of the country.

"If I can't work, I don't have money and I won't have a place to live. It's impossible for me to survive, so I'm going to say: ok I am going,” he said.

"In the end, they will make it difficult for me until I decide to leave."

Ylenia Gostoli is a producer at TRT World, previously based in the West Bank, Rome and London. She has reported from more than 10 European and Middle Eastern countries, often focusing on refugees. She was nominated for Anna Lindh’s Mediterranean Journalist Award 2014. 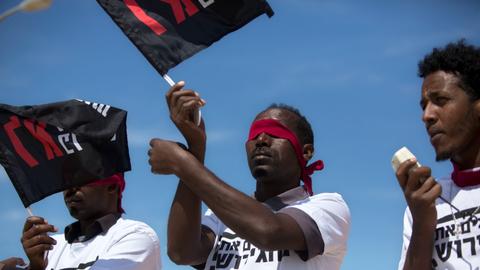