The theme of the fifth Istanbul Design Biennial is “Empathy Revisited: Designs for more than one”. TRT World speaks to the collaborators, Dilek Ozturk and Bilgen Coskun, curators of the atlas Harran project.

The fifth Istanbul Design Biennial is organised by Istanbul Foundation for Culture and Arts (IKSV). It “brings together ideas and projects that seek to define a new role for design based on empathy,” according to press materials.

The fifth Istanbul Design Biennial is curated by Mariana Pestana with Sumitra Upham (Curator of Programmes) and Billie Muraben (Assistant Curator & Deputy Editor). The projects displayed in the exhibition venues will be open to visit until November 15, 2020; while the interventions in the city, research projects and video series will continue to evolve until April 30, 2021, and beyond.

“This will be a biennial that slowly evolves from October this year until April 2021. In face of the many and constantly shifting challenges and regulations brought about by the pandemic, we devised a programme that rather than resisting or ignoring the current scenario, adapts to it,” the fifth Istanbul Design Biennial curator Mariana Pestana says.

“We propose a biennial that is generative and locally produced, with built-in legacy strategies, developed in dialogue with, and catered for, the citizens of Istanbul. Amidst an acute climate crisis and a global state of social isolation, the biennial invites us to think critically about how we relate to one another and to others, be them human or other bodies – biologic, bacterial, and geologic.

We want to position design as a mediation tool between us and the world around us, design as a tool to sense the world and its many constituents. And we are interested in asking, what perspectives may this sensing reveal? Does it connect us with elements, matters and living beings that we don’t normally connect with? And does such a connection elicit empathy in us?”

According to press materials, the fifth Istanbul Design Biennial presents “a generative programme comprising three main axes”: an online series titled Critical Cooking Show, a set of research projects on the Mediterranean basin to be archived at the Library of Land and Sea, and a series of interventions in the city titled New Civic Rituals.

In a written statement sent to TRT World, the In-Between Design Platform says “the atlas Harran design collection is focusing on design processes driven by geography in the fifth Istanbul Design Biennial”. Pointing out that the Istanbul Design Biennial has an international reputation of being “inquisitive and experimental”, Ozturk adds she is glad they have become a part of it this year.

The collection is being shown as a part of the New Civic Rituals section of the biennial from October 15 to November 15 at the In-Between Design Space at Beyoglu, Istanbul.

“atlas Harran is a design collection based on social, adaptive and collaborative design methodology, translating Mesopotamian knowledge and culture to today’s world through the handmade production by local and refugee women in Harran,” the In-Between Design Platform writes.

Harran, a district in southeastern Turkey, is part of Sanliurfa, a city on the Syrian border. The area has an ancient history, and Harran has been “the gateway of many civilizations.”

The In-Between Design Platform mentions that “Dating back to 10,000 years, these civilisations' contribution in the fields of architecture, astronomy, mathematics, geometry and societal interactions created through daily life rituals, were taken as references in the project. Designers translated these references into a collection addressing today’s language.”

The atlas Harran project has designed some works exclusive to the fifth Istanbul Design Biennial: Asli Smith produced a series of paper weaves titled ‘Ephemeral’ and Incomplit came up with a textile installation titled ‘Public Dreams’.

“Created with natural dyes and pigments, Ephemeral takes inspiration from colors, textures and mythology of Harran. It is a meditation on nature and time transforming the physical,” the In-Between Design Platform writes.

“Public Dreams is inspired by the myths of Assyrian, Babylonian and Greek civilizations settled in the area of Harran, reflecting the repeating story arc of ‘the myth’. The project underlines the role of myths on gender norms,” the In-Between Design Platform continues. “Specifically, with its colors in transition and the spiralling circular patterns, it highlights the need to supersede the strong asymmetrical stratifications between genders towards a world of multiplicity as well as interwoven narratives and identities.”

The In-Between Design Platform emphasises that there were many stakeholders in the atlas Harran project, all of whom were indispensable for the success of this undertaking: There are the curators Bilgen Coskun and Dilek Ozturk, founders of In-Between Design Platform, and the designers Asli Smith, Barıs Gun, Begum Cana Ozgur, DAY Studio, INCOMPLIT and Sule Koc who are based in Istanbul, Turkey. But the project would not have come to life without the support of the District Governor of Harran, who initiated the project, and ADEM (Family Support Centre) within the Governorship of Harran, dedicated to support women empowerment, who helped realise it, according to the platform. 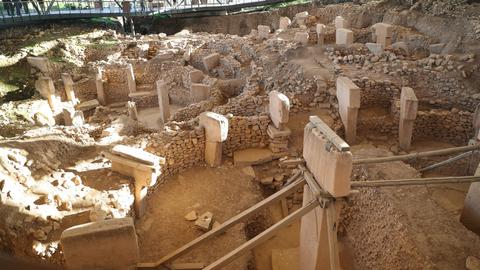 Exhibition in Turkey brings sounds of ancient times to life