1
Rescuers: Air strike on prison in Yemen's Saada kills, injures scores
2
Is the US trying to woo Turkiye over the Ukraine crisis?
3
Israel orders probe into police misuse of controversial hacking tool
4
Iran, Russia and China begin naval manoeuvres as tensions with US persist
5
Biden moving too slow on peace process: Palestinian minister

As ten members of the Joint List threw their weight behind prime ministerial candidate Benny Gantz, experts are pessimistic about whether Arabs will be welcomed into Israeli political discourse.

The decision by the Arab-Israeli coalition parties, known as the Joint List, to back Benny Gantz against Benjamin Netanyahu for Israeli prime minister was greeted as a potential positive turning point in Israeli politics.

The Joint List’s support for Gantz, the former Israeli army chief during the 2014 Gaza War, may seem like an unusual match. For one, the Arab parties seeking to represent Palestinians in Israel have made clear that they don’t agree with Gantz’s policies, but they seem intent to stake a role in bringing down Netanyahu.

Netanyahu's right-wing bloc has the endorsement of 55 parliamentarians. Whereas Gantz has the backing of 54, the Israeli president has given Netanyahu the first opportunity to form a working government.

Gantz, for his part, has rejected the support lent to him by the Joint List’s ten members (an additional three refused to back Gantz), refusing to adopt any of their policies, an indication that Arab parties in Israel have a long way to go.

Professor Ilan Pappe, Director of the European Centre for Palestine Studies at the University of Exeter and an Israeli historian, is sceptical about the importance of the Joint List’s declaration to back Gantz.

“It would have been significant if Gantz would have reciprocated by legitimising the Arab party as a partner in government, and he did not,” Pappe told TRT World.

“Even the Zionist Left can not consider an alliance with the Palestinian joint party. They [Joint List] are the third party, but they will not be included in the calculations for the formation of the next government. But of course, their presence in large number is important by itself,” added Pappe.

No Arab party has ever been part of a government in Israel.

If Netanyahu and Gantz form a national unity government, a proposition that seems increasingly likely, the Joint List, as the third-largest parliamentary grouping will become the official opposition, receiving briefings from the Mossad intelligence agency and meeting foreign dignitaries including heads of state.

It is a proposition that has yet to be tested and could be blocked by other opposition parties who may not want an Arab leader representing them.

‘Incitement by the right has left a terrible mark on Israel’

“The Joint List’s significant achievement is a positive development for the Palestinian-Arabs in Israel,” said Yossi Mekelberg, a Senior Researcher at Chatham House and Professor of International Relations at Regents University.

“However, unless the Israeli political system and society change and accept Palestinian participation in society, I don’t just mean as just ministers in the cabinet but whether they will accept the needs of the Palestinians such as investing in Palestinian education and deal with the housing pressure, they are citizens,” Mekelberg told TRT World.

There is an ongoing and longstanding debate in Israeli society about the identity of Palestinians and the extent of loyalty to the state. The Arab-Palestinian minority, constituting 21 percent of Israel, has often struggled to be heard politically.

Calls by Arab parties “for a state for all its citizens” are viewed by many on the right of Israeli politics as a Trojan horse rhetoric that hides the real intent, the destruction of the state and its “Jewish character.”

“Increasingly the psychology in Israel is that Arabs are seen as disloyal citizens,” said Mekelberg. “The incitement by the right has left a terrible mark on Israel. Some of what has been said should be dealt with in the courts, it’s criminal.”

During the election campaign trail, Netanyahu's right-wing bloc deliberately used divisive language in a bid to shore up his base and deepen fissures in society.

In the run-up to the elections, Netanyahu warned voters that there would be a high turnout amongst Arabs. His delegitimisation of the Arab vote went so far as to claim that they “stole the election” in April and that: “The Arabs want to annihilate us all – women, children and men.”

In the face of Netanyahu’s vilification of Arabs, the Joint List decision to back Gantz can be viewed as a pragmatic step to get rid of someone stoking divisive hate speech.

“There needs to be a change in Israeli discourse. First thing Gantz must do is abolish the Nation-State Bill, as it discriminates against Palestinian citizens" says Mekelberg in reference to a law passed by the Netanyahu government characterising Israel "nation-state of the Jewish people – and only it".

The Arab political party Balad withdrew their three members from the Joint List, leaving only ten members backing the former army chief, citing the “virtually indistinguishable” policies from those of Netanyahu.

“The political recommendation [to back Gantz] by the Joint List was wrong, either we want to change the system or offer cosmetic so it can appear more democratic,” said Abir Kopty, formerly a spokesperson for the Popular Struggle Coordination Committee, and a city council member in Nazareth, Palestine.

Arab-Israeli parties have found themselves in an unusual position of playing a central role in holding the balance of power in coalition negotiations and are maybe too keen to take the opportunity to get some access to power.

“Some of the Palestinian politicians want influence, but it shouldn't come at the expense of deleting Palestinian identity or existence,” Kopty told TRT World.

“I understand the need for influence, but the power they have in parliament is very small, and it doesn’t deal with most problems Palestinians face.”

The struggle between Palestinians and Jews is not just rooted in territorial claims but is also deeply connected with national narratives.

Kopty argues that Palestinian parties in Israel need to get out of the “citizenship bubble and connect with Palestinians” not only within Israel but also in the occupied territories.

“Decades of Palestinian political participation in Israel has only had a cosmetic difference on Palestinian lives, and Arab parliamentarians need to be held accountable on what they have achieved,” he said.

The systems of control and discrimination may not be as intrusive and exploitative as in the occupied territories, but they serve much the same function to disenfranchise and disempower.

“They don’t want you to be involved in their politics, they are telling you, and we need to have a discussion on that as Palestinians,” Abir said in reference to Gantz’s outright rejection of the Joint List.

Professor Ilan Pape, also the author of the Idea of Israel, a book that questions some of the foundational myths that gave rise to the creation of the state of Israel in 1948, is equally pessimistic about the opportunities that a Gantz premiership could hold.

So what comes next for Arab-Israelis? Well for Kopty there needs to be a wider discussion that goes beyond what many of the Arab parties are offering at the moment.

“We need to open up to the possibility of civil disobedience and boycotts,” she said.

What Israel says through its recent crackdown on Al Aqsa Mosque 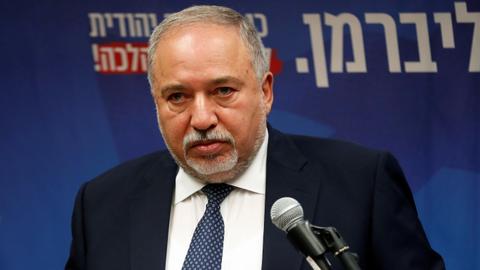 Israel heads toward unprecedented third election in one year

1
Rescuers: Air strike on prison in Yemen's Saada kills, injures scores
2
Is the US trying to woo Turkiye over the Ukraine crisis?
3
Israel orders probe into police misuse of controversial hacking tool
4
Iran, Russia and China begin naval manoeuvres as tensions with US persist
5
Biden moving too slow on peace process: Palestinian minister