So far Saudi Arabia has made several attempts to avoid connections to the killing of Saudi critic Jamal Khashoggi. However, evidence provided by the Turkish government strongly indicates that the murder was well plotted at the "highest levels" of the Saudi Kingdom, which could mean the order may even have come straight from Crown Prince Mohammed bin Salman (MBS).

The newly released recordings reveal that Maher Abdulaziz Mutreb, a member of the team of 15 men who allegedly carried out the killing in the Saudi consulate in Istanbul, made a phone call to his superior, a close aide of the crown prince back in Saudi Arabia, updating him about their killing mission.

“Tell your boss,” said Mutreb, a security official known to have close links to the crown prince, “the deed is done.”

The boss, according to US intelligence officials, is none other than Mohammed bin Salman himself.

Khashoggi walked into the Saudi consulate in early October, seeking a divorce certificate. He was planning to marry his Turkish fiancee, who accompanied him up to the consulate's entry gate.

When Khashoggi never came out, Turkey investigated his disappearance only to come to the conclusion that the Saudi journalist was murdered inside the consulate. While the Saudi government initially denied any involvement in Khashoggi's disappearance, Turkish authorities released groundbreaking evidence, bit by bit, puncturing the Saudi defence and catching the Kingdom's media managers off guard.

In a recent move, Turkey shared the tapes of Saudi operatives’ conversations concerning the murder with the US and other western countries.

Though Riyadh changed its position on the killing — from a total denial to accepting the murder had been premeditated —  the involvement of higher authorities, as evidenced by the Turkish authorities, leaves the kingdom in an awkward position.

Turkish President Recep Tayyip Erdogan recently upped the ante, saying the murder had been committed under the command of “highest levels” of Saudi government. Riyadh was quick to issue a denial, defending MBS.

The Saudis even refused to acknowledge that the recordings consisted of the “tell your boss” phrase. In a blunt denial, the government said: “At no moment was there any reference to the mentioned phrase in the recordings.”

“A phone call like that is about as close to a smoking gun as you are going to get. It is pretty incriminating evidence,” Bruce O. Riedel, a former CIA officer, told the New York Times, which was the first to disclose the content of the recordings.

Beyond the clear evidence against the Saudi state, the murder of a prominent journalist by state operatives in their own consulate located in a foreign country is something the world has not seen in recent history, said William Schabas, a prominent international law professor at Middlesex University in London.

”It’s obviously not lawful under the laws of Turkey or the laws of Saudi Arabia. It’s completely unlawful,” said Schabas, who is recognised as a world expert on the law of genocide and international law.

Another disturbing detail is about the Saudi Consul General in Istanbul, Mohammad al Otaibi, who left Turkey on October 16, one day after the Turkish government began its probe into Khashoggi's disappearance. Ever since, Otaibi has been keeping a low profile.

Trump calls it the "worst cover-up"

While several European countries have displayed shock and unease over Khashoggi's disappearance, or what Turkish authorities have described as a brutal murder, US President Donald Trump has been accused of being less concerned about the brutality of the murder and more disappointed over Saudi's inability to plan a cover-up.

Trump reversed his predecessor Barack Obama's policy of building relations with Iran, scrapping the critical Iran nuclear deal this summer and re-establishing strong ties with the Saudi monarchy, which could now falter due to the Khashoggi murder.

"They had a very bad original concept, it was carried out poorly and the cover-up was the worst in the history of cover-ups,” Trump said, during a press conference in late October.

With several western countries criticising Saudi over Khashoggi's possible murder, Washington is still looking for ways to continue its relations with the oil-rich kingdom under the de facto leadership of MBS.

The crown prince is seen as Trump's favourite in the kingdom. His promotion to the second most powerful position in the Saudi kingdom has reportedly had the blessings of the Trump family. Trump's son-in-law Jared Kushner has vouched for the crown prince on several occasions.

Kushner, a Jewish American and a close friend of Israeli Prime Minister Benjamin Netanyahu, has played a key role in forming relations between the Trump administration and the Saudis, the crown prince in particular, lobbying for him in Washington. Since then, he has also played a crucial intermediary role between the Saudis, the Trump administration and the Israelis.

But the Khashoggi crisis could turn things upside-down for the blossoming Saudi-US alliance. Since the emergence of the Khagoggi murder, both anti-Trump American media and prominent US politicians, including senior senators, have constantly questioned the wisdom of Kushner’s partnership with MBS.

After the midterms, in which the Democrats, Trump’s political rivals, managed to take a majority in the US Congress, the political mood could also be changing in favour of tough measures against the kingdom.

Many intelligence agencies have already concluded that without crown prince's order, no Saudi operatives can dare to commit a murder like Khashoggi's in such a sensitive diplomatic space. Recent Saudi dismissals following the murder have also pointed at the crown prince.

Under immense pressure from Turkey, Trump is also giving signs that he might adopt a strict tone in pursuit of punishing Khashoggi's murderers.

“I’ll have a much stronger opinion on that subject over the next week,” Trump said last week.

“I am forming a very strong opinion.” 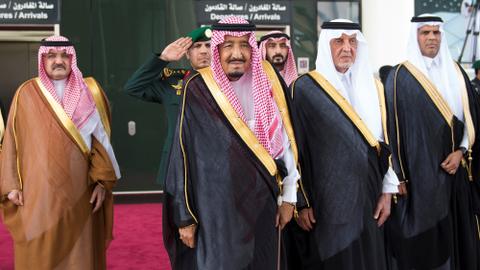 Did internal dissent in Saudi Arabia lead to the murder of Jamal Khashoggi?