Why Libya's rival factions have escalated tensions in the capital Tripoli

The latest fighting between the two rival forces from Tripoli has shown how shifting alliances, a prominent pattern in the civil war, has marked the North African country’s conflict.

Libya, a Middle Eastern country which has gone through a disastrous civil war like Syria following the Arab Spring in 2011, has seen another bloody escalation over the weekend, with at least 32 people dead and scores wounded.

Unlike previous fights, which usually involved eastern and western-based armed groups, the recent clashes have emerged between the two rival factions of Tripoli-based political forces in the country’s west. The Libyan civil war has been fought between warlord Khalifa Haftar-led eastern forces and the Tripoli-based western forces.

The GNU was formed last year with an expectation to unite the war-torn country’s eastern and western political factions by holding a fair election, to which many have invested their hopes to bring political stability to the Northern African state. But the election has not been materialised until now, being delayed since December and leaving the country’s militias in a complete havoc.

In the meantime, Bashagha, who was a woven enemy of Haftar in the past, has become an ally of the warlord after seeing not himself but Dbeibah was chosen as the prime minister of the UN-led government in Tripoli.

“In the absence of any diplomatic breakthrough between Tripoli and eastern-based forces, Basagha thought that it’s time to move against Dbeibah, who has recently replaced some commanders and officials including the chairman of the country’s National Oil Corporation, fomenting opposition to his rule” says Ferhat Polat, a Turkish political expert on Libya.

Since July, under the new chairman, the country’s state-owned oil producer, which provides most of the country’s revenues, has been working at a nearly fully-operational level. Despite recent fighting, Libya’s oil production continues to be as high as possible, according to reports.

In February, Bashagha was named as the prime minister-designate by the Tobruk-based House of Representatives led by Aguila Saleh, a Libyan politician. Haftar also expressed his support to Bashagha against Dbeibah. But even in the House of Representatives, the designation of Bashagha as the prime minister was backed by some members as many others refused to attend the election process.

While many continue to debate the identity of forces behind the recent attack on Tripoli, “Bashagha’s attack against Dbeibah’s forces appears to be his own initiative,” Polat tells TRT World. Polat believes alleged recent communication between Dbeibah and Haftar might also make Bashagha nervous, pushing him to take some serious risks to attack Tripoli.

Salah Bakkoush, a Libyan political analyst and former advisor to the High Council of the Libyan state, partly agrees with Polat. “Haftar was in no position to support Bashagha for logistical and political constraints. However, reliable reports talk of Aguila telling his confidants last week that he had given Bashagha a week to enter Tripoli,” Bakkoush tells TRT World.

After a decade-long stalemate in the Libyan civil war, the international community is ready to accept any force, who is able to claim Tripoli, as a legitimate government of the country, according to many observers. As a result, different forces from Dbeibah to Bashagha and Saleh continue to fight for the control of the capital.

Both Bakkoush and Polat believe that clashes will continue indefinitely as long as the country can not hold fair elections. But both western and eastern forces do not appear to commit to go ahead with the country’s much-needed election process, according to Polat.

“With the heads of the House of Representatives and the state Council - Aguila Saleh and Khaled Al-Mashri -, who are responsible for issuing the legal framework for elections, clinging to power after the end of their terms, the political deadlock will continue, and these clashes and Haftar's war on Tripoli in 2019 are nothing more than symptoms of the country’s underlying power struggles,” says Bakkoush.

“While both Dbeibah and Bashagha continue to suffer from the political deadlock, the latter will potentially lose more from his fight to capture Tripoli,” sees Polat. But Haftar and Saleh are happy to see Dbeibah and Bashagha, the two crucial figures of Tripoli, to fight each other, he adds.

Bakkoush also believes that Bashagha’s chances to come to power has increasingly become a distant possibility after six months with “two botched attempts to enter the capital and resounding military defeat last week.”

“I think the wind is almost completely out of Bashagha’s sails. However, that doesn’t necessarily mean that the struggle for power by political or military means is over and they’ll continue sporadically.” 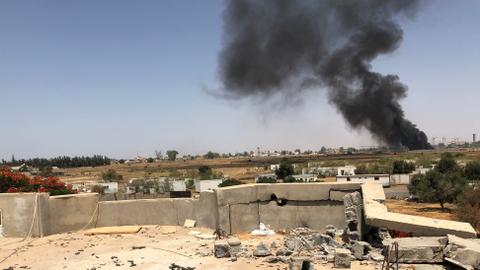