Is Russia serious about a political solution to the Syrian conflict?

Moscow shows tacit support for a status quo in which the Syrian regime can veto any constitutional proposals it deems unacceptable.

Russia came to the rescue in late September 2015 and saved the Assad regime from certain collapse at the hands of the armed opposition. Since then, it has managed to establish itself as the key player in Syria.

However, recent actions by the Kremlin cast doubt on its commitment to a political settlement that satisfies even the minimum requirements needed for a peaceful resolution to the conflict.

Is Russia serious about modifying the regime’s behaviour? If so, does it wield enough influence to bring about a meaningful resolution underpinned by genuine political change?

The Kremlin’s notion of political change in Syria is inexorably linked to its own strategic and economic objectives. This includes securing its sole naval base in the Mediterranean, located in Tartous, buttressing its lucrative contracts in the energy and mineral sectors, such as oil, gas, and phosphate, and attempting to expand its reach in the Middle East. These imperatives require a stable client in Damascus.

The notoriously brutal and inflexible regime of Syrian President Bashar al Assad has shown little willingness to concede to popular demands or engage in meaningful negotiations with the opposition. Its acceptance in discussing constitutional change within the framework of the Constitutional Committee has proven to be a mere tactic meant to placate its Russian sponsors while also buying time to mobilise in preparation of military offensives aimed at recapturing swathes of territory lost throughout the conflict.

Yet, Moscow’s signals regarding a settlement to the conflict have been neither clear nor consistent. On 7 September, during a visit to Damascus by a Russian delegation, Russian Foreign Minister Sergei Lavrov stated that constitutional change is a “sovereign matter,” effectively echoing the official line of the regime.

In reality, this signalling denotes Russia’s tacit support for a status quo in which the regime can with impunity veto any constitutional proposals it deems unacceptable. Lavrov’s position reinforces the notion that the constitutional ‘process’ in practice represents a Russian ploy intended to circumvent the implementation of a genuine resolution based on the international consensus.

The 2012 Geneva Communique  – based on Security Council Resolutions 2042 and 2043 – called for the implementation of a ceasefire, a transitional body with full power and free and fair elections supervised by the UN. Passed unanimously in 2015, Resolution 2254 later reaffirmed its basic tenets. In principle, Russia claims to support this process.

However, Lavrov’s comments are bound to discourage the opposition from participating in further negotiations. Currently, only 50 of 150 members of the Committee are staffed by opposition figures. The other 100 are evenly divided between representatives from Damascus and Syrian “civil society” delegates – many of whom are hand-picked by the top echelons of the regime.

Assad’s underhanded tactics and endless procrastination have made the opposition dependent on Russian support. Here, Russia has played an insidious game of avoiding any moves that could publicly implicate it for the failure to produce concrete results while also guaranteeing very little to the opposition.

In addition, Turkish President Recep Tayyip Erdogan’s relations with Russian President Vladimir Putin have been tested by the latter’s failure to check the regime’s behaviour in zones where Moscow and Ankara have fashioned an agreement regarding the rules of engagement.

Currently hosting 3.7 million Syrian refugees, Ankara fears the influx of an additional million displaced should the regime launch its long-threatened offensive to recover Idlib from the rebels. Turkey’s apprehensions are exploited by the regime, which along with Iran and Hezbollah, have consistently rejected diplomacy in favour of an unrelenting military solution.

Russia has at times been involved in these escalations. Recently, the Russian army once again supported escalations in Idlib and Latakia. If this evolves into a major conflagration, it risks military confrontation between Russia and Turkey, which has thousands of troops deployed in northern Syria. This would likely torpedo any prospect of a political settlement in Syria, particularly as Russia has often sought to leverage its partnerships in the region to neutralise its most troublesome ally: Iran.

Competition between Russia and Iran has highlighted deep cracks in their once-overlooked marriage of convenience. Tehran’s deep penetration within Syria challenges Moscow’s attempt to monopolise patronage over Damascus, making it a strategic spoiler in the eyes of the Kremlin.

To this end, the US and Israeli aim to dislodge the Iranian presence in Syria is a card Russia can play to strong-arm the regime into cooperating with negotiations. For example, by covertly enabling Israel, as it has done in the past, to strike Iran-aligned militias, Russia can curb the intransigence of the regime by targeting its main backer, thereby limiting its options.

Russia has also occasionally refused to provide air cover when Iranian-led offensives have contradicted its own strategic calculus, resulting in heavy casualties for the regime and Iranian assets. In February, the Russian-Turkish ceasefire deal rescued these forces from slaughter.

Another complicating factor is the presence of the US-backed, Kurdish-dominated Syrian Democratic Forces, or SDF. If the militia and the political parties attached to it insist on the autonomy they have attained by force, this runs contrary to the demands of both the regime and the opposition. Though the SDF has struck deals with Russia in the past, often to the chagrin of Turkey and their US patrons – and sometimes even the regime – Putin has thus far viewed them as an instrument to counterbalance other actors.

A failure to offer them any reasonable degree of autonomy risks losing them as a lever, while doing so risks alienating all other actors. It also potentially threatens to push Assad further into Iran’s uncompromising orbit.

Russia is keenly aware of its current limitations in Syria. It finds itself awkwardly positioned in a balancing act that entails constantly trying to navigate the largely competing interests of the conflict’s main players in order to maximise its agenda.

Seen against such a complex backdrop, Russia’s recent conciliatory stance towards the Syrian regime may be a temporary tactic meant to dissuade Assad from continuing his pivot towards Iran. It could very well be a tool for stalling until Moscow musters enough resources to be able to impose its will without significant contestation from either Assad or Iran.

Given the timing of Lavrov’s visit to Syria – less than two months before the US election – Putin may be waiting out the political scene in Washington before deciding whether or not to pressure the Assad regime to entertain a political settlement. It remains to be seen if Russia has the political will or ability to pressure the regime into modifying its behaviour and ending the suffering of the Syrian people. 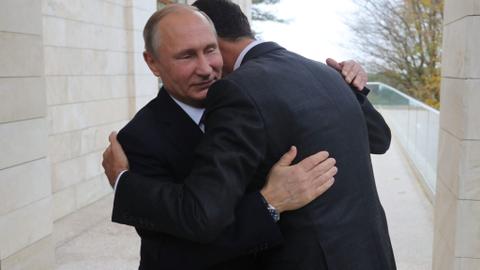