Why the US can't give up on Russian uranium

American scientists are worried that Russia may hinder the operation of nuclear reactors in the US by stopping the supplies of uranium. If those fears come true, the US will face a major electricity crisis.

What will happen to US nuclear power without Russian uranium? To answer this question briefly, theoretically, a nuclear meltdown.

Back in the very beginning of Russia's attack on Ukraine, experts predicted the mass closure of US nuclear power plants in the event of a uranium embargo.

As a result, uranium imports were indeed not banned- unlike oil, petroleum products, gas and coal. After all, the US energy industry relies on supplies from Russia, Kazakhstan and Uzbekistan for almost half of its needs.

Searching for What is Lost

US sanctions have not yet touched nuclear fuel from Russia, although Washington "is being urged by political risks" to reduce its share.

Back in March, Nima Ashkebussi, head of the National Energy Institute, said that "US electric utilities are now contracting for the necessary fuel with a network of companies and countries around the world to reduce the risks of potential supply disruption."

"Russia is a significant global supplier of commercial nuclear fuel," Ashkebussi noted at the time.

In fact, the Europeans are reacting in the same way. For example, the European Commission has approved the "REPowerEU" plan, aimed at reducing the member-nations’ dependence on Russian fossil fuels. Sweden's Forsmark and Ringhals nuclear power plants, which used to buy fuel from Rosatom, have reported switching to Westinghouse assemblies.

On June 8, Bloomberg reported about plans of the US Department of Energy and lawmakers to allocate $4.3 billion to create their own facilities for uranium enrichment.

According to the agency, at present, there is only one commercial uranium enrichment facility in the United Statesbut it belongs not to  Americans but to the European consortium URENCO.

Not surprisingly, experts believe that Rosatom's European competitors, Orano and URENCO, may strengthen their positions thanks to the current situation.

"So far, it is difficult to imagine how the one or two plants available in the US can compensate for Russia's untold uranium treasures, thanks to which a fifth of the US nuclear power industry operates," Life experts note.

Bloomberg sources say that the US Energy Department seriously fears that Russia's conflict with the West may disrupt fuel supplies to US nuclear power plants.

Ironically, the fear stems not from possible sanctions against Rosatom but from the fact that Moscow might cut Rosatom supplies.

The US has been buying relatively inexpensive Russian uranium for over 30 years, Kompaniya reminds us. From 1993 to 2013, they used Russian weapons-grade uranium as fuel under the HEU-LEU contract signed by Boris Yeltsin.

As a reciprocal gesture that was agreed upon, the Russian Federation destroyed 20,000 of its nuclear warheads and received $17 billion from the Americans.

This fuel, packaged by the European company URENCO in assemblies for American nuclear power plants, provided the US with half of its total nuclear fuel needs.

As they said in Washington, "thanks to Russian missiles," every tenth light bulb there has worked for 20 years. The Russian nuclear industry, in turn, survived thanks to this money.

The analyst specified that today the US has 96 operational nuclear reactors, but the country has no isotope separation facilities of its own.

"Nearly half of the world’s uranium separation facilities are located in Russia. This number is excessive for Moscow and this is why a considerable part of them is focused on America’s needs.”

Alexander Uvarov, editor-in-chief of AtomInfo.ru, explained to Kommersant that the danger of such dependence on Russia is well-known in the US, as well as the fact that the US has been periodically wishing to restore its own production for about 20 years. Moreover, two years before the current events, the US Department of Energy proposed to limit imports of nuclear fuel from Russia.

"But the centrifuge uranium enrichment technologies that Russia and Europe have, the US has never had in commercial use," Uvarov continues.

"They can't buy that technology, so they have to either steal it or develop it from scratch. All they have today are the Centrus experimental laboratory facilities. It will take at least 5-10 years to develop the whole industry all over again.”

On June 13, Matt Bowen and Paul Dubbar of Columbia University's Center for Global Energy Policy warned in an article for The Hill that Russia could shut down nuclear reactors in the US with a single decision.

"And given that nuclear power accounts for more than 20 percent of generating capacity in some parts of the country, electricity prices would jump even higher than today's inflation rate," the publication said.

The scientists remind us that many of the reactors operating in the US and the EU are also made by Russia, which also supplies components for them, and if the conflict between Moscow and the West continues, many nuclear power plants will indeed be forced to suspend operations.

Today, Rosatom holds 17 percent of the world nuclear fuel fabrication market - the third largest after the US’s Westinghouse and the French AREVA.

Curiously, “the US is not on the list," emphasises journalist Viktor Yadukha.

Yet, according to Rosatom's 2020 report, the UA accounted for 50 percent of uranium material supplies.

The paradox of the situation can be explained by the fact that Rosatom is not shipping finished fuel assemblies to the US, which are hexagonal for Russian and Soviet reactors, but semi-finished uranium.

American manufacturers then use it to stuff the square-shaped assemblies that are traditional for Western reactors. According to US data, in 2020, Russia accounted for almost a quarter of all enriched uranium shipments for commercial reactors in the US.

Last year, Rosatom shared its plans until 2030, one of which was to increase exports of nuclear technology and become the international market leader in nuclear fuel with a 24 percent share of the global market.

It is difficult to say what will happen to these plans now, but it is obvious: if they change, then only slightly.

It is well known that Rosatom's most expensive line of business is Small Atom - developing and building a line of low-power nuclear power plants.

Its cost is estimated at 260 billion rubles, of which 39.15 billion rubles are allocated from the budget. By December 31, 2028, four floating power units based on RITM-200 reactors (55 MW) are to be put into operation in order to supply energy to the Baimsky Mining and Processing Factory.

So far, only one small NPP has been put into operation in the world: the domestic floating nuclear power plant Akademik Lomonosov (70 MW).

There are three more facilities under construction around the world, one in Argentina (30 MW CAREME) and two in China (210 MW HTR-PM and 125 MW ACP100). And all of them, especially the Russian ones, are important to the whole world.

In case of Russia's unexpected response to the Western energy sanctions, not only the US but also some European countries risk being affected.

Even France, for which nuclear generation accounts for 70 percent  of the country's energy balance, could face problems, Anpilogov suggested.

Of course, many countries are counting on Kazakhstan in the current situation.

"Kazakhs now produce the most uranium in the world," the analyst said.

Together with Uzbekistan, they account for approximately 50 percent of global uranium mining.

However, everyone knows about the friendly relations between Russia and Kazakhstan.

"If Western sanctions start to hit Rosatom, the state corporation may well use the Kazakh uranium leverage," Anpilogov concludes.

As things stand now, a US attempt to quickly revive its own uranium enrichment for nuclear power plants by reducing Russian purchases is unlikely to quickly change the balance of power in the global nuclear fuel market. 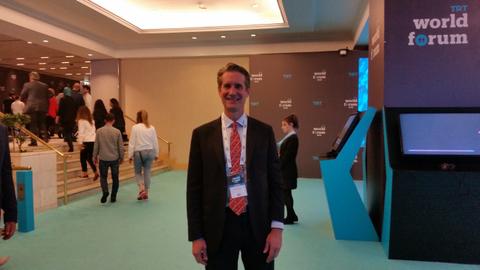 If not impeached, Trump will be re-elected, says former US ambassador